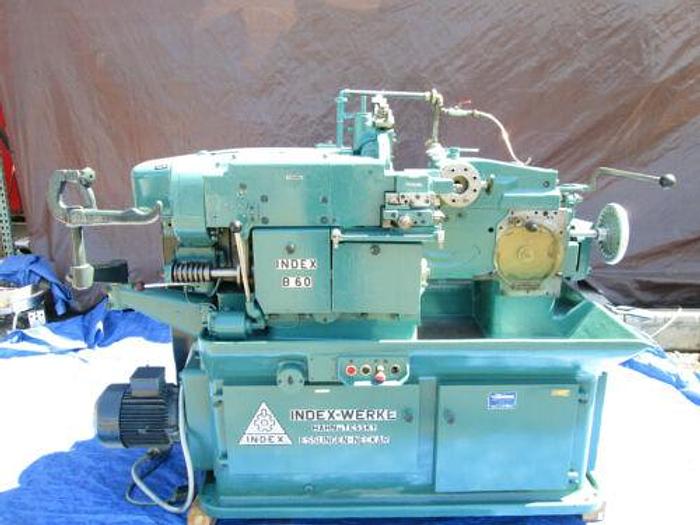 Based in Esslingen, Baden-Wüurttemburg, Germany, the INDEX factory (Index-Werke KG Hahn & Tessky) produced a range of single-spindle automatic, mechanical (cam-operated) lathes of a type that, prior to the introduction of computer control, formed the largest single class of machine dedicated to the mass-production of high-precision small parts. Even today, during the early decades of the 21st century, such lathes still find a use where a simple, low-cost yet high-precision solution to manufacturing needs is required. Though complex mechanisms in their own right, their inherent simplicity, ease of operation and adjustment, compact dimensions and reliability over very long production runs are still hard to beat. As one experienced setter of these machines remarked: ….there is a sense of achievement and excitement when all the tools and cams are fitted and the machine timed up; and then, after a short session of adjustment, to go on and manufacture thousands of identical parts, all new and shiny. Now adapted to computer control (having abandoned cam operation), these machines and their close cousins the "Swiss Auto" are, unsurprisingly, still being built by numerous makers world-wide. In its jubilee year the factory was employing 1450 staff, had a manufacturing floor space of around 334,000 square feet with 830 machine tools and produced around 120 finished autos per month.Founded on the 2nd of January, 1914, by Hermann Hahn (already an established machine-tool maker and proprietor of Hahn & Kolb in Stuttgart) Index began in rented premises with a separate firm, "Werkzeugmaschinesfabrik INDEX, Hahn & Kolb", established with eighteen workmen, four office staff and two apprentices. At the end of the first year (and just into the start of World War 1) the first automatics of the INDEX Type 1 and Type 2 were being delivered to customers. By 1917 the number of employees had grown to 150 and by now convinced of their success, the company bought the land on which their works stood. In 1919 Hermann Hahn took on his brother, Oskar, as a partner and by 1921 had further expanded to employ two-hundred and sixty-seven workers and introduced the INDEX 0, designed under the supervision of chief engineer Adolf Mayer. In 1922 a new chief engineer, Karl Tessky, formerly of Siemens & Halske in Berlin, was appointed and the firm registered under the new name of "INDEX-Werke Hahn & Kolb". During 1924 and 1925 a modern fitting and assembly shop was erected and a proper apprentice-training school opened. In 1927 the Types 1 and 2 models were superseded by the Models 12-18, 20, 24, 30 and 36 and the following year a retirement trust fund, for aged and infirm workers, was established with an initial capital of 60,000 Marks. In 1929, just as the world reached The Great Depression (with a serious downturn in trade) the total workforce reached 585 and Karl Tessky, in recognition of his essential services, became a full partner. Thanks to the specialised nature of their business INDEX weathered the trading difficulties well and, having had to lay off few workers, started 1932 with a new model, the long-lived and very successful Type OR high-speed turret automatic. With the world's economic crisis easing, INDEX continued to expand during the mid years of the 1930s and, in 1937, erected new buildings to accommodate the now 850-strong workforce. In 1938 Eugen Hahn, son of Hermann Hahn and working as a qualified engineer since 1934, joined the company which was henceforth known as "INDEX-Werke KG.Hahn & Tessky".Although Hermann Hahn died in 1939 at the age of 74, this did not diminish the company's progress and by 1940 (at the start of WW2 and with a consequent increase in production) employee numbers rose to a record high of 1200. However, once into the war, a slight scaling back of operations was experienced with numbers falling to 950 at the war's end in 1945. By great good fortune (though poor planning by target annalists) the works were not hit by Allied air action and escaped the conflict undamaged and with all facets of production capacity intact. However, now taken over by the occupying forces and marked as a technical prize, the plant was dismantled and (though not confirmed) it is certain that many valuable machine tools would have been removed. Despite these setbacks, by 1949, and assisted by the post-war Marshall reconstruction plan, work was in progress on new buildings with a fresh sales organisation, "INDEX-Verkaufs-GmbH", being established in Stutgart. By 1950 production of the 12-18-25 range had resumed and the number of employees rose to 300. In 1951, Karl Tessy, who received an honorary Doctorate from the Technische Hochschule in Stuttgart in 1949, retired from active participation in the company. By 1953 connections to the founding family were further loosened with the death of Frau Ida Hahn, widow of the founder, though Eugen Hahn continued to be involved in day-to-day activities. In 1954 the works area occupied by the American Army was finally released and production began of the new INDEX B30, B42 and B60 models, one of these being the 20,000th automatic to leave the factory. In 1956 employee numbers had risen to over 1,000 and the INDEX-Verkaufs-GmbH organisation moved to the factory site at Esslingen. In 1956 Oskar Hahn died (in his 82nd year) and Karl Mühlschlegel, commercial director since 1919, retired - his place being taken by Dr. Manfred Borst. Further development of both factory and machines now took place with the opening of a new building to replace the old material store and the introduction, at the 6th European Machine Tool Exhibition in Paris, of the C19 and C29 turret automatics. At the following exhibition, held during 1961 in Brussels, the INDEX DG12 was announced and went into production during that year. New buildings were added in 1962 for the machining of major components and Dr. Tessky - who had so much to do with the success of the company - died in Stuttgart at the age of 78..